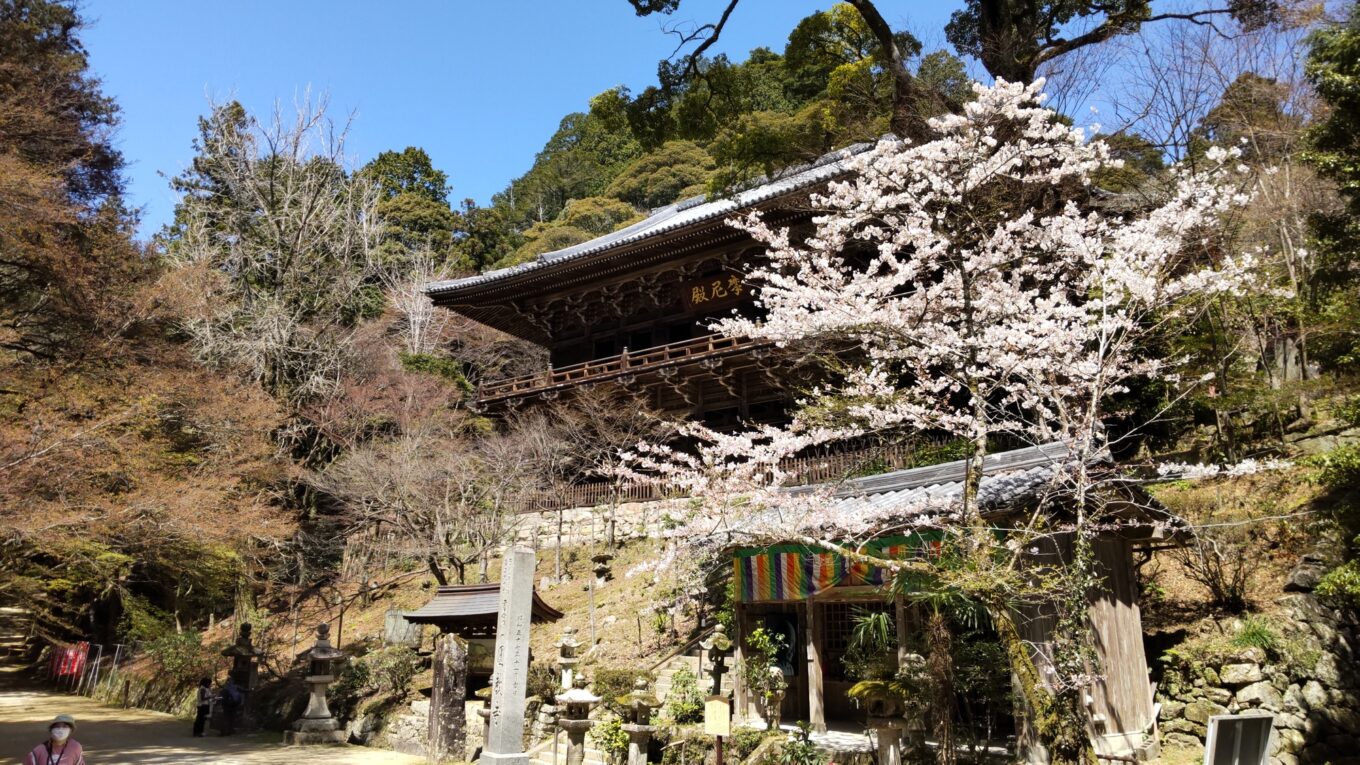 Half an hour by bus from Himeji station is Mount Shosha. Although there is a cable car that brings one easily most of the way up the mountain, it is much nicer to hike up along the steep and rocky south ridge. It is not a very long hike since the mountain is only 371 meters tall, but it rises quickly from the valley below with frequent spectacular views of the whole of Himeji and the surrounding area.

The trail begins at a small temple behind a high school in a residential neighborhood on the edge of Himeji.

It climbs quickly to the top. Along the way are many small shrines with offerings of flowers, candles or incense. These are often found at the marked stations along the way. Typically a mountain path is marked by ten roughly equally spaced signs indicating how far up the mountain one has come and has left to go. Often there is a rest area or viewpoint at each station. Here there were twelve stations to the top of the ropeway and a few more before reaching the temple gate.

Along the way are also numerous inscriptions carved into the rock.

On top sits Engyoji (圓教寺), a Tendai Buddhist temple complex that was built more that 1000 years ago. It was completed in 966. There is little left from its original construction, except perhaps some of the stone monuments, since the temples are all constructed of wood and have been rebuilt many times. The whole place was also burned to the ground by Oda Nobunaga during the chaotic Warring States Era. But the oldest of the structures there are still almost 500 years old. It is quite an amazing place. It has also become quite famous in the West because a movie called “The Last Samurai” was filmed there. I have not seen the movie, so the first time I visited last fall was the first time I had ever seen its astounding beauty.

The trail takes one to the main entrance at the end of the ropeway. After you pay the admission fee, which supports the temples maintenance, you can ring the big gong and acsend the road along which are stationed 33 statues of Kannon (or Kanzeon) bodhisattva, orginally known as Avalokiteshvara, the bodhisattva of compassion. Kannon is represented in a variety of forms, but always serves the same function, that of hearing and responding to the cries of all in need. Kanzeon in Japanese is 観世音 with kanji meaning “view,” “world” and “sound,” as in the one who perceives the sound of those throughout the world who need assistance.

After passing by these statues one reaches the sanmon or main gate. Although, by entering the gate below at the temple at the base of the mountain, the whole trip so far has been within the temple in a sense, it is here that one enters the temple proper.

The large woven sandals one often sees hung up inside the gate of temples are apparently there to deter demons from entering. On seeing such over-sized sandals hanging there, any demons passing by are led to believe that there is a giant who lives there and who is currently at home and so go off to cause trouble somewhere else.

After ascending through cedar and maple woodlands the path descends past a cemetary and down into a hollow with the huge wooden structure of the main temple Maniden towering above.

There are many smaller buildings that once comprised a thriving Tendai Buddhist monastery. Even though now it is mostly quiet with visitors slowly wandering through, taking pictures and admiring the beauty of the place it was once home to hundreds of monks living their lives according to principles of Tendai Buddhism, a tradition that originated in China, and flourished in Japan starting more than 1000 years ago. Tendai is alive and well world wide, headquartered at Enryakuji on Mount Hiei near Kyoto, but with branches all over the world including in America and England.

One interesting thing for me in visiting a place like Engyoji is that there is no distinction here between what we in the West usually think of as two separate “religions” — Buddhism, which arose in India and then spread throughout Asia, coming to japan some 1500 years ago, and the indigenous Shinto, which is a modern name for the many cults devoted to the gods who inhabit the woods and mountains as well as cities of Japan. Even though there have at times been conflicts between these two traditions, at the moment they live happily together.

If you are ever in Himeji, it is well worth the time to visit Engyoji. You can take the ropeway, but I much recommend walking in the footsteps of the monks who have been coming here since Maniden was first built more than 1000 years ago.

2 thoughts on “Mount Shosha and Engyoji” 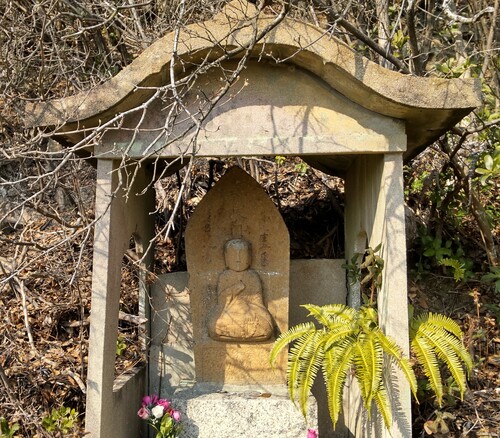